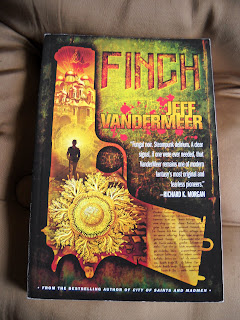 Finch is one of a trio of science fiction books by Jeff Vandermeer, all set in the same location but stand-alone otherwise and is the 1st of them I've read. I thoroughly enjoyed it. I'm intrigued by the setting and the characters and look forward to reading the other two. The Younger Son has Cities of Saints and Madmen and will lend it to me when I'm ready.

I got a kick out of the passing mention that Finch's father homeschooled him "when it was too dangerous to go to class."

Tasked with solving an impossible double murder, detective John Finch searches for the truth among the war-weary ruins of the once-mighty city of Ambergris. Under the six-year rule of its inhuman gray cap masters, Ambergris is slowly crumbling into anarchy. The remnants of a rebel force are dispersed, their leader, the mysterious Lady in Blue, missing. Citizens are being interned in camps. Collaborators roam the streets keeping brutal order. But Finch also has to contend with new forces rising, like the enigmatic spymaster Ethan Bliss, and the contamination of his partner, Wyte, who is literally disintegrating under the strain.

The Washington Post likes it and says it "wriggles from the grip of easy categorization." An SF Site review describes it as "New Weird meets pulp noir, a hard-boiled detective story unwinding in Ambergris's surreal mean streets." Strange Horizons calls it "a triumph in terms of both vision and execution." From SF Signal: "BOTTOM LINE: The vibrant storytelling of a perversely beautiful city and its hard-boiled detective is well worth the reading." The Guardian closes with this:

is a compelling experience, a fungalpunk nightmare pullulating with dark, phantasmagorical transformations: it works equally as a stylish detective story, a perverse example of the New Weird fantasy subgenre, and an effective metaphor for the dehumanising effects of occupying forces and totalitarian regimes.