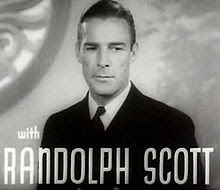 Today is the anniversary of the death in 1987 of actor Randolph Scott, best known for his Western films. His first film was in 1928 and his last in 1962. He had a remarkable career, working with directors John Ford, Cecil B. DeMille, King Vidor, Fritz Lang, John Sturges, Sam Peckinpah and others.

My favorite Randolph Scott reference is from Blazing Saddles:


You can watch some of his films online, including Captain Kidd with Charles Laughton and John Carradine and Abilene Town with Ann Dvorak and Lloyd Bridges.

The photo at the top of the post is from wikipedia.
Posted by Divers and Sundry at 6:30 AM