Stop the Killing, End the War 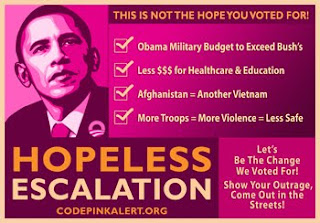 I had offered to run The Elder Son to work, and, on the way, we passed a group of sign-wavers at the corner of Poplar and Highland. I'm always interested in protesters, and The Elder Son said one of the signs said, "Another Mommy for Peace." "Stop the Killing, End the War" was on another. Ah, these are my people! After I dropped him off, I pulled into the parking lot, getting out to say a word of support for their efforts before I came on back home to have supper with The Younger Son. One of the women is someone I met at the Memphis Friends Meeting.

I had done a bit of online searching for some kind of Memphis demonstration in response to Obama's decision but couldn't find anything. I'm glad there was some activity on the street. Not that I think it'll do any good. I'm just so disgusted with the whole thing. Of all the campaign promises he could choose to keep, he picks this one? And I thought getting out of Iraq was part of the deal... I can't imagine that they think they can win this thing. The Younger Son is fond of the saying, "You can't win an occupation." This feels an awful lot like Vietnam to me... I'm somewhat gratified that the officials who've been whining about the cost of health care reform are raising the issue of the cost of this continuing escalation.

You can watch the President's address live at Hulu. We'll probably see if the local public station covers it. Surely they will. [They didn't. We watched NBC.] 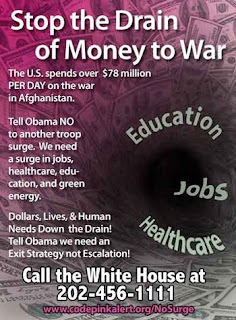 The images in this post are from Code Pink's site Women Say No to War. (Their PDFs lock up my computer for some reason.)
Posted by Divers and Sundry at 3:10 PM