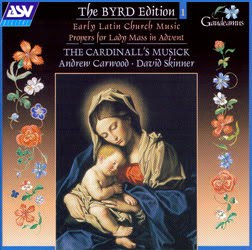 The Byrd Edition, Volume 1, sung by The Cardinall's Musick, is the first volume of a project to cover the entire works of William Byrd. This CD includes early Latin church music and propers for Lady Mass in Advent.

from the notes included with the CD:

Admirers of Byrd's music may immediately be struck not only by the fact that the majority of works on this disc are heard rarely in performance (not to mention on disc) but also that many of them sound unlike what we have come to accept as "typically Byrd". In his early manuscript works one hears the strong influence of the music of John Sheppard and Thomas Tallis, although at this stage Byrd already carries a distinct voice of his own.

You can listen to samples of the music at Amazon.
Posted by Divers and Sundry at 12:15 PM