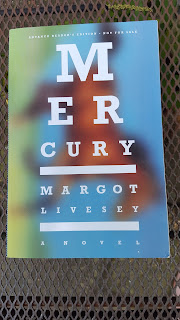 Mercury is a 2016 novel by Margot Livesey. I came across this used and picked it up not knowing anything about the book or the author. I found this a fascinating look at how little we really know even the people closest to us and how disastrous keeping secrets can be. I'll definitely look for more books by Livesey. You can read an excerpt here.


Donald believes he knows all there is to know about seeing. An optometrist in suburban Boston, he is sure that he and his wife, Viv, who runs the local stables, are both devoted to their two children and to each other. Then Mercury -a gorgeous young thoroughbred with a murky past- arrives at Windy Hill, and everything changes.

Hilary, a newcomer to town, has inherited Mercury from her brother after his mysterious death. When she first brings Mercury to board at Windy Hill, everyone is struck by his beauty and prowess, particularly Viv. As she rides him, Viv begins to dream of competing again, embracing the ambitions that she harbored before she settled for a career in finance. Her daydreams soon morph into consuming desire, and her infatuation with the thoroughbred escalates into obsession.

Donald may have 20/20 vision, but he is slow to notice how profoundly Viv has changed and how these changes threaten their quiet, secure world. By the time he does, it is too late to stop the catastrophic collision of Viv's ambitions and his own myopia.

The New York Times closes with this:


This is, in the end, less a book about mercurial change than mundane mismatch. There are the incongruities between the husband’s and the wife’s understanding of their marriage. There’s the difference between Viv’s aspirations and what the quotidian constraints of her life allow. And you could say that the novel suffers from a similiar flaw. It’s a book that doesn’t quite measure up to its ambitions.


In constructing a narrator who is at once transparent (he reveals so much of himself, his limitations and his puzzlement over them, to the reader) and opaque (he is frequently emotionally unavailable to the people around him and even to himself), Livesey roots tension not just in the bones but in the very marrow of the book. In the end, this is not so much a crime novel as a novel about a trial: the story of one man’s austere endeavor to hold himself to account.

The New Yorker says, "The novel explores themes of honesty and understanding by showing the impact that obsessions—grief, rapacity—can have on a marriage." Kirkus Reviews closes with this: "Uncharacteristically dark, yet more evidence of Livesey’s formidable gifts."
Posted by Divers and Sundry at 4:00 AM