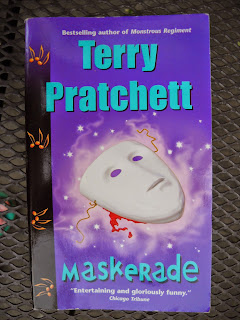 Maskerade is #18 in the Terry Pratchett Discworld series. This one features the witches. I started by reading these in publication order, but I've given that up. Now I buy them when I see them and read them in whatever order they come to me. This one is laugh-out-loud funny. I want to read it aloud to somebody, but nobody seems to want that. They just don't know what they're missing! The Younger Son loves this series, and I pass these along to him once I'm done.

Pratchett announced in late 2007 that he was suffering from early onset Alzheimers. The 40th Discworld book was published last year, so he seems to be doing better than had been expected at the time of the diagnosis. For this and other blessings we rejoice.

The Ghost in the bone-white mask who haunts the Ankh-Morpork Opera House was always considered a benign presence -some would even say lucky- until he started killing people. The sudden rash of bizarre backstage deaths now threatens to mar the operatic debut of country girl Perdita X. (nee Agnes) Nitt, she of the ample body and ampler voice.

Perdita's expected to hide in the chorus and sing arias out loud while a more petitely presentable soprano mouths the notes. But at least it's an escape from scheming Nanny Ogg and old Granny Weatherwax back home, who want her to join their witchy ranks. Once Granny sets her mind on something, however, it's difficult -and often hazardous- to dissuade her. And no opera-prowling phantom fiend is going to keep a pair of determined hags down on the farm after they've seen Ankh-Morpork.

Of course, Granny Weatherwax made a great play of her independence and self-reliance. But the point about that kind of stuff was that you needed someone around to be proudly independent and self-reliant at. People who didn't need people needed people around to know that they were the kind of people who didn't need people. It was like hermits. There was no point freezing your nadgers off on top of some mountain while communing with the Infinite unless you could rely on a lot of impressionable young women to come along occasionally and say "Gosh."

You needed at least three witches for a coven. Two witches was just an argument.

And since the IQ of a mob is the IQ of its stupidest member divided by the number of mobsters, it was never very clear to anyone what had happened.

SF Signal gives it 4 1/2 out of 5 stars, calls it "almost non-stop funny" and says, "Pratchett is in fine form". SF Site has a positive review. SFF Book Review closes with this:


Discworld is a feel-good place, even though bad things happen there as much as anywhere (if not more). Make a note for reading slumps or bad times or terrible weather. Because I know where I’ll be when either of these happen. RATING: 8/10 Excellent!