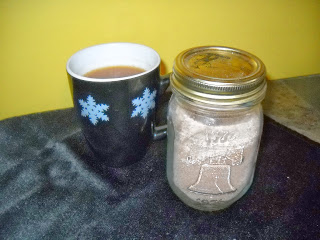 When I was in high school I found a recipe for Spice Tea. It was quite popular back in the day, and recipes were frequently in magazines and newspaper articles during the Christmas holiday season. I didn't like the recipe I tried; it was just too sweet for me. I adjusted the recipe: I doubled the amount of instant tea, left out the sugar entirely, and changed the spices. This is the recipe I came up with:


Mother quit drinking it several years ago, saying it was just too sweet. I haven't made any since, but The Daughter decided it was time. I made some one day while she was here. We enjoyed a cup together, and I sent a jar of it home with her.

The cup came from Dollar Tree and is one of my winter-time cups. We don't get much snow around here, but sometimes a snowflake is fun to look at, on this cup if not flurrying in the sky.

The jar is a 1976 Bicentennial jar. I remember all the Bicentennial hoopla. You couldn't buy anything, it seemed, without a bicentennial connection. We had bicentennial Christmas tree decorations in 1975. It was a mad craze! My Mother was so excited about all the celebrations, and then Daddy died not long after the 1976 year began.

My memories are a mixture of happy and sad, as I guess is the case with most people.

Join Bluebeard and Elizabeth's T Party here.
Posted by Divers and Sundry at 4:30 AM