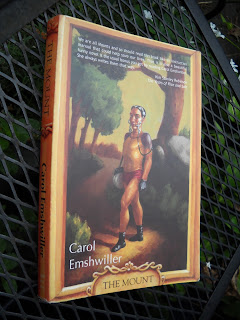 The Mount is a 2002 science fiction book by Carol Emshwiller. It won the Philip K. Dick Award in the year in which China Miéville's The Scar was also nominated. The Scar is one of my favorite Mieville books, and -in my opinion- much better than this.

I remember hearing about The Mount when it won that award and meant to read it, but I forgot. I ran across it used and was glad for the reminder. That said, there aren't that many characters in this book, and I tired of them before the end. At 232 pages I thought the plot dragged and might've made a better story at a shorter length. I'm not buying the alien race at all. They make no sense to me, and I found them and their situation unbelievable from start to finish. I thought the ending was unsatisfying. I liked her writing and would read something else by her if I came across it, but I won't keep this one. Perhaps it might work better as an introduction to science fiction for a child?

Charley is an athlete. He wants to grow up to be the fastest runner in the world, like his father. He wants to be painted crossing the finish line, in his racing silks, with a medal around his neck.

Charley lives in a stable. He isn’t a runner, he’s a mount. He belongs to a Hoot: The Hoots are alien invaders. Charley hasn’t seen his mother for years, and his father is hiding out in the mountains somewhere, with the other Free Humans. The Hoots own the world, but the humans want it back. Charley knows how to be a good mount, but now he’s going to have to learn how to be a human being.

The Mount is the new novel by Carol Emshwiller, author of Carmen Dog and Ledoyt.


Kirkus Reviews calls it "A deceptively simple, clear-eyed story that should find its sympathetic Gullivers." SF Site praises the writing, but closes with this: "I didn't like this book much, although I certainly admired it. Some genre readers will find it delightful. But SF fans who expect credible science and realism had better take a miss." SF Reviews.net opens by saying, "Suffice it to say that whatever it is about this book that is blowing away awards committees is missing me by a mile" and later adds, "Putting this book down came all too easily." Jeff Vandermeer closes by saying, "this one of the most sympathetic and endearing books I’ve read lately." Stephen Wu says, "I just couldn't get into it," faulting the worldbuilding, the poor point-of-view writing, and "the oddest, most fitfully plotted conclusion I've read in a long time." Infinity Plus states, "The Mount is not a successful novel."
Posted by Divers and Sundry at 6:30 AM