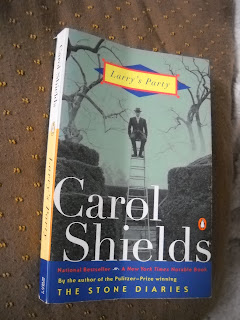 I like Carol Shields' writing. I've read The Stone Diaries and Unless and pick up books by her when I see them in the used book shops.

Larry's Party tells the story of Larry's life through middle age. As he develops a passion for landscaping -particularly maze installations- and marries and divorces twice and develops a relationship with his son, the extraordinary nature of all our lives is somehow revealed in the life of this one ordinary man. It won the Orange Prize and the National Book Critics Circle Award.

There is a mention of Memphis, TN, on page 156 when Larry surveys a site outside Memphis. Elvis Presley is mentioned on page 258.

There is an exploration of paintings of the Annunciation, with particular mention of ones in Madrid, including these: this Fra Angelico altarpiece, the El Greco (described as a "whirling triumph") and Picardo ("a gem"). Of all of them, the character favors Robert Campin's, because Mary is reading.


Larry listens. This is how he's learning about the world, exactly as everyone else does - from sideways comments over a lemon meringue pie, sudden bursts of comprehension or weird parallels that come curling out of the radio, out of a movie, off the pages of a newspaper, out of a joke - and his baffled self stands back and says: so this is how it works.


Sometimes Larry sees his future laid out with terrifying clarity. An endless struggle to remember what he already knows.


It strikes Larry that language may not yet have evolved to the point where it represents the world fully.

Recognizing this gap brings him a rush of anxiety. Perhaps we're waiting, all of us, he thinks, longing to hear "something" but not knowing what it is.

Larry Weller has never thought himself extraordinary in the least. Like so many people, though, he has a transforming passion -and his is designing garden mazes. With their teasing treachery and promise of reward, they gesture toward life itself. Larry's Party is Carol Shields' invitation to peer into Larry's own life. Vignettes, like family snapshots, capture Larry at the most poignant, hilarious and moving points of his existence: two marriages and two divorces; his bewildered, loving relationships with parents, friends, and son; and his awkward and well-meaning quest to be a good man. If he can only figure out what that is. Carol Shields' marvelous novel captures -with salty wit and flawless wisdom- the joys and sorrows of everyday life, and shows us how these moments add up to something immensely important.

Kirkus Reviews closes by saying, "Very fine and real: Shields writes with the rare self- assurance of one who from the first knows where her characters are going and what will become of them once they arrive, and--rarer still--manages not to bend them out of shape along the way." Publishers Weekly says, "The novel glows with Shield's unsentimental optimism and her supple command of a sweetly ironic and graceful prose." Canadian Literature Quarterly says, "Shields uses the novel form to explore new ways of writing a life, of uncovering what she has termed "the mystery of personality" and calls the book "admirable for its compassionate tracing of the puzzling and circuitous paths an ordinary man walks in the process of losing and finding the love and the work that define him as a human being."

There's a reading group guide here.
Posted by Divers and Sundry at 6:30 AM