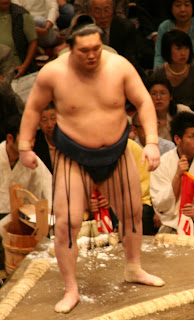 Mongolian Hakuho has won the New Year Basho, beating compatriot and fellow Yokozuna Asashoryu in a fantastic finale to the fifteen day event.

Hakuho finally won with a throw to claim his third title in a row and sixth overall. Hakuho's only loss was to one of the other Mongolians wrestling in the top-tier

The photo by Eckhard Pecher was taken from wikipedia.

More news on the subject at The Japan Times. And ABC News reports on attempts to popularize the sport in America.
Posted by Divers and Sundry at 5:05 AM