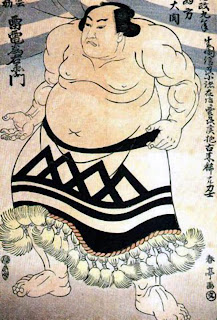 OSAKA, JAPAN — It sure looks real enough, all those vicious slaps to the face and head-smacking collisions and men of generous poundage being hurled into the dirt.

I saw the news at WorldHum, which asks:

Is Japan’s beloved sport of sumo wrestling scripted and fake?

I've always gotten a big kick out of Sumo wrestling and would hate to think the big guys cheat!
Posted by Divers and Sundry at 7:34 AM