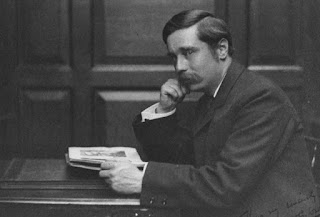 The Stolen Body is an 1898 supernatural tale by H.G. Wells. It begins,


Mr. Bessel was the senior partner in the firm of Bessel, Hart, and Brown, of St. Paul's Churchyard, and for many years he was well known among those interested in psychical research as a liberal-minded and conscientious investigator. He was an unmarried man, and instead of living in the suburbs, after the fashion of his class, he occupied rooms in the Albany, near Piccadilly. He was particularly interested in the questions of thought transference and of apparitions of the living, and in November, 1896, he commenced a series of experiments in conjunction with Mr. Vincey, of Staple Inn, in order to test the alleged possibility of projecting an apparition of one's self by force of will through space.

Their experiments were conducted in the following manner: At a pre- arranged hour Mr. Bessel shut himself in one of his rooms in the Albany and Mr. Vincey in his sitting-room in Staple Inn, and each then fixed his mind as resolutely as possible on the other. Mr. Bessel had acquired the art of self-hypnotism, and, so far as he could, he attempted first to hypnotise himself and then to project himself as a "phantom of the living" across the intervening space of nearly two miles into Mr. Vincey's apartment. On several evenings this was tried without any satisfactory result, but on the fifth or sixth occasion Mr. Vincey did actually see or imagine he saw an apparition of Mr. Bessel standing in his room. He states that the appearance, although brief, was very vivid and real. He noticed that Mr. Bessel's face was white and his expression anxious, and, moreover, that his hair was disordered. For a moment Mr. Vincey, in spite of his state of expectation, was too surprised to speak or move, and in that moment it seemed to him as though the figure glanced over its shoulder and incontinently vanished.

You can read it online here. You can listen here: