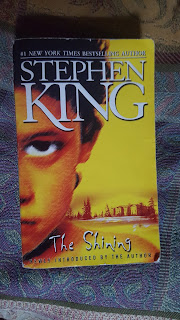 I've seen this movie more than once and liked it but had never read the book. Now that I've read the book I realize how far short the film falls. Not that the film isn't an impressive film, but the book is much better. The Shining is a 1977 horror novel by Stephen King.

The Overlook Hotel is more than just a home-away-from-home for the Torrance family. For Jack, Wendy, and their young son, Danny, it is a place where past horrors come to life. And where those gifted with the shining do battle with the darkest evils. Stephen King's classic thriller is one of the most powerfully imagined novels of our time.

The Guardian explores the differences between the book and the novie. Horror Novel Reviews says, "Let me say from the start that I consider The Shining (Stephen King’s third published novel) to be the scariest book I’ve ever read." Kirkus Reviews describes it as "Back-prickling".