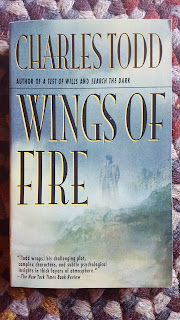 Wings of Fire (1998) is the 2nd book in the Inspector Ian Rutledge post-WW1 detective series. Written by Charles Todd, this is the pen name of the mother/son writing team of Caroline and Charles Todd. The Younger Son and I both enjoyed the first book when we read it years ago, and we began passively looking for the second book without success. Later books in the series are on book shelves but never this second one. The Husband gave this to me this past Christmas.

Inspector Ian Rutledge is quickly sent to investigate the sudden deaths of three members of the same eminent Cornwall family, but the World War I veteran soon realizes that nothing about this case is routine. Including the identity of one of the dead, a reclusive spinster unmasked as O. A. Manning, whose war poetry helped Rutledge retain his grasp on sanity in the trenches of France. Guided by the voice of Hamish, the Scot he unwillingly executed on the battlefield, Rutledge is driven to uncover the haunting truths of murder and madness rooted in a family crypt…