A Long and Happy Life 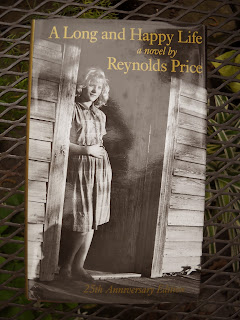 A Long and Happy Life is the 1962 award-winning first novel by Reynolds Price. This is a short, easy-to-read novel exploring the life of a young girl in rural North Carolina who has waited 8 years for the boy she's set her heart on to offer her any word of commitment. Price actually makes you feel her pain.

from the dust jacket of the 1987 edition:

On its initial publication in 1962, Eudora Welty said of A Long and Happy Life, "Reynolds Price is the most impressive new writer I've come across in a long time. His is a first-rate talent and we are lucky that he has started so young to write so well. Here is a fine novel."

From its dazzling opening page, which announced the appearance of a stylist of the first rank, to its moving close, this brief novel has charmed and captivated millions of readers since its publication twenty-five years ago and its subsequent translation into fifteen languages. On the triumphant publication of Kate Vaiden, his most recent novel, in 1986, there was almost no review that -praising the new book to the skies- didn't also mention in glowing terms the reviewer's fond recollection of the marvelous first novel, the troubled love story of Rosacoke Mustian and Wesley Beavers and its beautifully evoked vision of rural North Carolina. It is a pleasure now to restore to print the cloth-bound edition of this truly enduring work as a companion to his brilliant book of essays, A Common Room, published simultaneously.

Just with his body and from inside like a snake, leaning that black motorcycle side to side, cutting in and out of the slow line of cars to get there first, staring due-north through goggles towards Mount Moriah and switching coon tails in everybody’s face was Wesley Beavers, and laid against his back like sleep, spraddle-legged on the sheepskin seat behind him was Rosacoke Mustian who was maybe his girl and who had given up looking into the wind and trying to nod at every sad car in the line, and when he even speeded up and passed the truck (lent for the afternoon by Mr. Isaac Alston and driven by Sammy his man, hauling one pine box and one black boy dressed in all he could borrow, set up in a ladder-back chair with flowers banked round him and a foot on the box to steady it) -when he even passed that, Rosacoke said once into his back "Don’t" and rested in humiliation, not thinking but with her hands on his hips for dear life and her white blouse blown out behind her like a banner in defeat.

This book is mentioned in many reviews of Price's later work, but actual reviews are harder to find. Kirkus Reviews has a short but positive review.

I've read Kate Vaiden (and loved it) and Good Hearts (but liked it less).
Posted by Divers and Sundry at 4:00 AM