The Child in Time 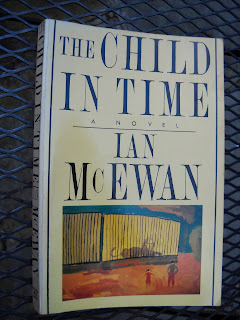 The Child in Time is a 1987 Whitbread Prize-winning novel by Ian McEwan. It takes place in a near-future dystopia and deals with the relativity of time and the effect of deep personal loss on life and relationships. This has been a difficult read, dealing with loss as it does.


Stephen Lewis, a successful writer of children's books, is confronted with the unthinkable: his only child, three-year-old Kate, is snatched from him in a supermarket. In one horrifying moment that replays itself over the years that follow, Stephen realizes his daughter is gone.With extraordinary tenderness and insight, Booker Prize–winning author Ian McEwan takes us into the dark territory of a marriage devastated by the loss of a child. Kate's absence sets Stephen and his wife, Julie, on diverging paths as they each struggle with a grief that only seems to intensify with the passage of time. Eloquent and passionate, the novel concludes in a triumphant scene of love and hope that gives full rein to the author's remarkable gifts. The winner of the Whitbread Prize, The Child in Time is an astonishing novel by one of the finest writers of his generation.


Thre was no single action for which Stephen could generate a motive. He saw no point in being warm, or in having socks or teeth. He could carry out simple commands so long as he did not have to reflect on their rationale.

The constant urban rumble could not mitigate the burdensome silence that emanated from the carpet's deep pile, the fleecy towels on the wooden stand, the granite folds of the velvet curtain. Still dressed, he lay on his back on the bed. He was waiting for the pictures, the ones he could only dispel by jerking his head.

... however familiar, parents are also strangers to their children.

If he could live in the present he might breathe freely. But I don't like the present, he thought, and picked up his things.

He mentions the books of his adolescence, naming Hemingway, Chandler and Kerouac.

Several pieces of music are mentioned, including "a Bach partita". This is Bach Partita #1:

Kirkus Reviews calls this book "a work of remarkable intellectual and political sophistication--his most expansive and passionate fiction to date."
Posted by Divers and Sundry at 4:30 AM