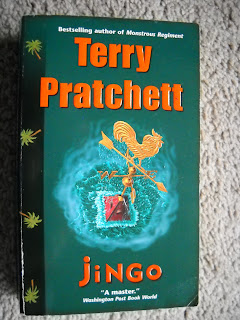 Jingo is one of the Discworld books by Terry Pratchett. The City Watch is featured and Death makes only a fleeting appearance.

It isn't much of an island that rises up one moonless night from the depths of the Circle Sea - just a few square miles of silt and some old ruins. Unfortunately, the historically disputed lump of land called Leshp is once again floating directly between Ankh-Morpork and the city of Al-Khali on the coast of Klatch - which is spark enough to ignite that glorious international pastime called "war." Pressed into patriotic service, Commander Sam Vimes thinks he should be leading his loyal watchmen, female watchdwarf, and lady werewolf into battle against local malefactors rather than against uncomfortably well-armed strangers in the Klatchian desert. But war is, after all, simply the greatest of all crimes - and it's Sir Samuel's sworn duty to seek out criminal masterminds wherever they may be hiding... and lock them away before they can do any real damage. Even the ones on his own side.

SFSite calls it "a fine addition to the Discworld series" but says it's not his favorite. This review, also at SFSite, opens by saying,

Jingo does not contain as many laugh-out-loud moments as many of the Discworld novels, but there are still many humorous moments in the book as Pratchett makes his statements about war, but moreso about the nature of mobs, civic pride and nationalism.

My favorite moments in the book are

"Do you need an excuse to have a war?" said Nobby? "I mean, who for? Can't you just say, 'You got lots of cash and land but I've got a big sword so divvy up right now, chop chop?' That's what I'd do," said Corporal Nobbs, military strategist. "And I wouldn't even say that until after I'd attacked."

"Ah, Captain Jenkins! This is your lucky day!"
The captain looked up from the rope he was coiling. No one likes being told it's their lucky day. That sort of thing does not bode well. When someone tells you it's your lucky day, something bad is about to happen.

I have read these other books from this series:
The Color of Magic
The Light Fantastic
Equal Rites
Mort
Sourcery
Wyrd Sisters
Pyramids
Guards! Guards!
Posted by Divers and Sundry at 6:30 AM