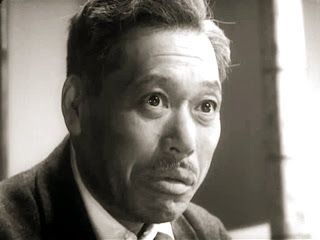 Today is the anniversary of the death in 1982 of Japanese actor Takashi Shimura, who appeared in numerous Akira Kurosawa films across the decades. I had never seen a Kurosawa film until fairly recently and had never heard of Takashi Shimura, but we have grown into an appreciation of him as we've seen him in some of his varied roles. There's more information on this actor at FilmReference.com.

The photo at the top of the post is of him in his role in Ikiru.
Posted by Divers and Sundry at 7:21 PM