Cassatt to Wyeth at the Dixon

Cassatt to Wyeth: American Masterworks from the Cedarhurst Center for the Arts was the exhibit I had been wanting to see while The Younger Son was mostly drawn to the Macaulay. I think we both enjoyed them both. The Dixon site introduces the exhibit by saying,

The extraordinary permanent collection of American paintings, works on paper, and sculpture owned by the Mitchell Museum at Cedarhurst Center for the Arts has made Mt. Vernon, Illinois, one of the most remarkable small towns in the United States. The collection was largely formed in the 1940s through the 1960s by John R. and Eleanor R. Mitchell, a prosperous Mt. Vernon couple, who acquired major examples by Thomas Eakins, Mary Cassatt, Childe Hassam, John Singer Sargent, George Bellows, Robert Henri, William Glackens, and others, at a time when American art was underappreciated and much undervalued. Those artists have since proven to be some of the most crucial figures in the development of American culture.

It's not a large exhibit, but there's some interesting variety.

The Younger Son's favorite was The Philosopher, a thoughtful view of the man in earnest conversation with the rabbit:

My favorites were Prendergast's (d.1924) By the Seashore: 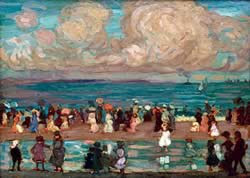 and Alice Ravenel Huger Smith's Egrets in a Storm.

The Mitchell Museum at Cedarhurst Center for the Arts did not provide a catalog, which I wouldn't have bought anyway, but they also provided no postcards. I've had growing difficulty getting postcards at art exhibitions, and I do miss not coming home with a small reminder of one of the paintings.
Posted by Divers and Sundry at 11:37 AM